George Harrison said it was too avant-garde. Now Sir Paul says the time has come to release 1967’s ‘Carnival of Light’ 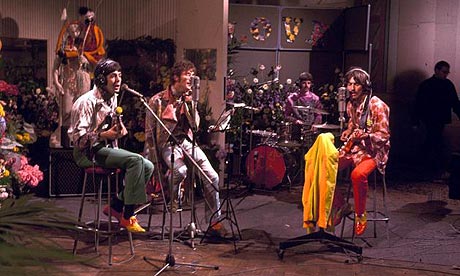 For Beatles fans across the world it has gained near mythical status. The 14-minute improvised track called ‘Carnival of Light’ was recorded in 1967 and played just once in public. It was never released because three of the Fab Four thought it too adventurous.

The track, a jumble of shrieks and psychedelic effects, is said to be as far from the melodic ballads that made Sir Paul McCartney famous as it is possible to imagine. But now McCartney has said that the public will have the chance to judge for themselves.

‘It does exist,’ McCartney says on a BBC Radio 4 arts programme to be broadcast this week. Talking to John Wilson, the presenter of Front Row, the former Beatle confirms that he still has a master tape of the work and says he suspects that ‘the time has come for it to get its moment’.

‘I like it because it’s the Beatles free, going off piste,’ he adds.

In the 40 years since ‘Carnival of Light’ was recorded by McCartney, Ringo Starr, George Harrison and John Lennon in the Abbey Road studios in London, its collection of disparate rhythms has become a kind of holy grail for Beatles obsessives. The track was put together on 5 January 1967, in between working on the vocals for the song ‘Penny Lane’.

Once released it should offer proof that the Fab Four, and McCartney in particular, were much more avant-garde in their tastes than many gave them credit for. According to the few who heard the track on the one occasion the recording was played publicly, at a London music festival in 1967, it features the sound of gargled water and strangled shouts from Lennon which vie with church organs and distorted guitar.

‘We were set up in the studio and would just go in every day and record,’ McCartney tells Wilson. ‘I said to the guys, this is a bit indulgent but would you mind giving me 10 minutes? I’ve been asked to do this thing. All I want you to do is just wander round all of the stuff and bang it, shout, play it. It doesn’t need to make any sense. Hit a drum, wander to the piano, hit a few notes … and then we put a bit of echo on it. It’s very free.’

McCartney had been commissioned to create a piece for an electronic music festival at the Roundhouse Theatre in north London by his friend Barry Miles. The event, the Million Volt Light and Sound Rave, was organised by International Times, an underground newspaper. Many in the audience had no idea they were listening to a new Beatles track. Other performers included Delia Derbyshire whose work at the BBC Radiophonic Workshop included jointly creating the theme for Doctor Who.

McCartney, who this month releases his third experimental album of new work under the alias the Fireman, regards ‘Carnival of Light’ as evidence of how musically adventurous he has always been. For the three other Beatles the track was just an oddity. George Harrison dismissed it as too weird. But McCartney is hopeful it can now be released with the agreement of the group’s estate.

‘It will help reaffirm McCartney’s claim to have been the most musically adventurous of all the Beatles,’ said Wilson this weekend. ‘He told me he would love to release the track. All he needs now is the blessing of Ringo Starr, Yoko Ono and George Harrison’s widow Olivia.’

The piece was inspired, McCartney says, by the works of composers John Cage and Karlheinz Stockhausen. In his book Complete Beatles Recording Sessions, author Mark Lewisohn – who was played the track in 1987 – describes ‘distorted, hypnotic drum and organ sounds, a distorted lead guitar, the sound of a church organ, various effects (water gargling was one) and, perhaps most intimidating of all, Lennon and McCartney screaming and bawling random phrases including “Are you all right?” and ‘“Barcelona!”.’

Beatles fans came close to hearing ‘Carnival Of Light’ in 1996 when it was considered for inclusion in the exhaustive Anthology compilation. ‘We were listening to everything we’d every recorded,’ McCartney says. ‘I said it would be great to put this on because it would show we were working with really avant-garde stuff … But it was vetoed. The guys didn’t like the idea, like “this is rubbish”.’

Sir George Martin, the Beatles producer who oversaw the track, has described it as ‘one of those weird things’. ‘It was a kind of uncomposed, free-for-all melange of sound that went on. It was not considered worthy of issuing as a normal piece of Beatles music at the time and was put away.’

Coincidentally, McCartney played some of his Fireman compositions at the reopened Roundhouse venue last year during the Electric Proms. ‘With the Fireman you’re in disguise,’ he told Observer Music Monthly. His pseudonym may have been taken from the lyric of ‘Penny Lane’ where a fireman ‘rushes in from the pouring rain’ and could also be a nod to his father, Jim McCartney, a firewatcher on the Liverpool docks in the Second World War.